Next in Fashion by Pearl Academy 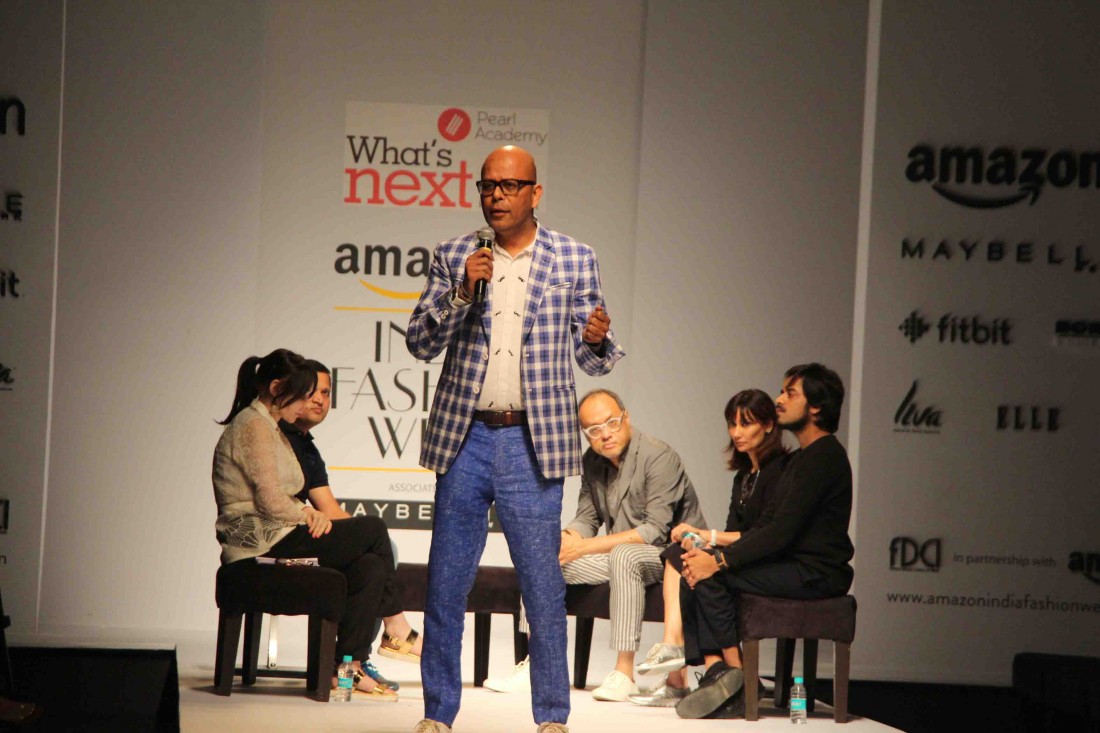 Common people keep wondering how and what the fashion industry has to give back to the society. Whereas people who are interested in design and want to make a career in it keep thinking how to earn a living out of this industry. At the recently held ‘Amazon India Fashion Week AW’16’ many of these doubts were dealt with on a twin-day panel discussion sponsored by Pearl Academy, India’s leading private school of fashion and design.

The discussions were graced by the presence of stalwarts of the industry who are increasingly devising new ways to reach out to the untapped-but-interested-masses, micro small and medium enterprises dealing in textiles. The discussion also had a special feature to address the doubts of students regarding the management practices of this dynamic industry.

The first initiative of Pearl was #BeSomebody, an inspiring talk for all the budding designers as experts shared their experience in this industry. They narrated anecdotes from their own journey – including both success and hardships they faced. Anju Modi whose career spans over two decades, recalled how her designs charmed director Sanjay Leela Bhansali. 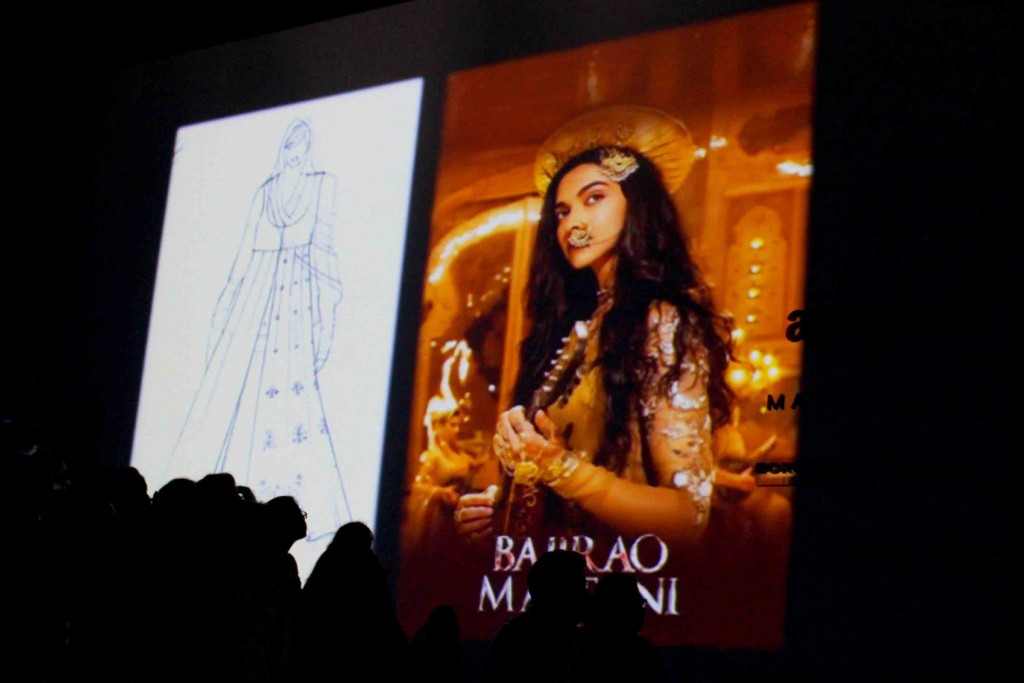 It eventually resulted in her collaborating with him for two of his epic movies – Ram Leela and Bajirao Mastani. She described the process of designing for these two celluloid dramas for which she undertook strenuous research expeditions by visiting the hinterlands of India. 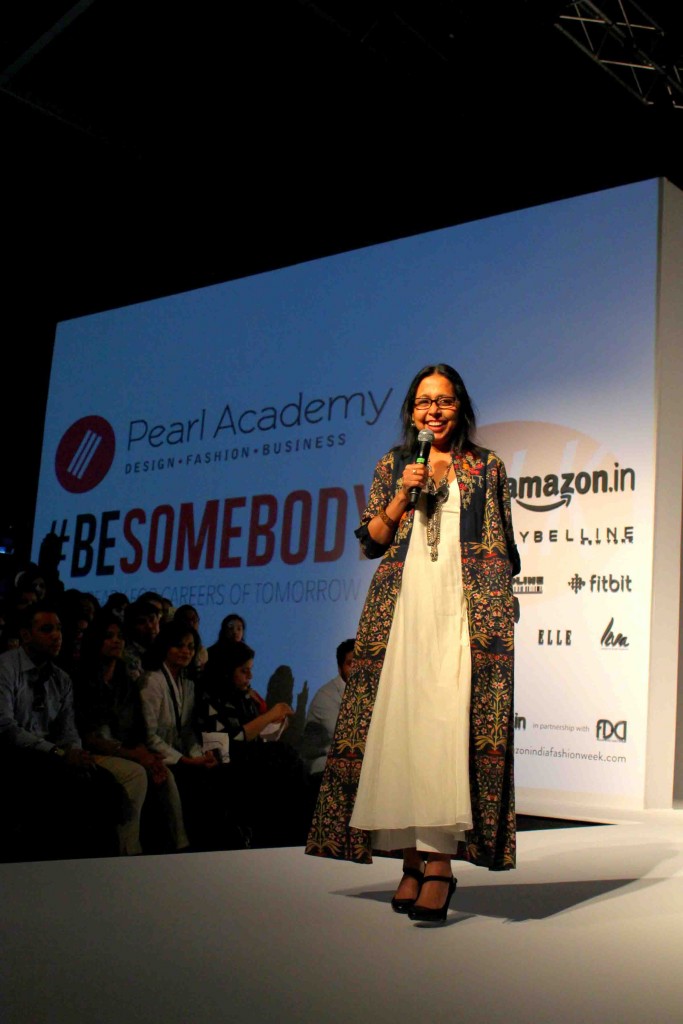 She also remarked how she would rather look into India than going to the international hubs like Milan and Paris to be inspired. These visits to the remotest parts of India (like Kutch), have shaped her views regarding the importance of giving back to the society. She has plans to set up an R&D centre to promote development of crafts. 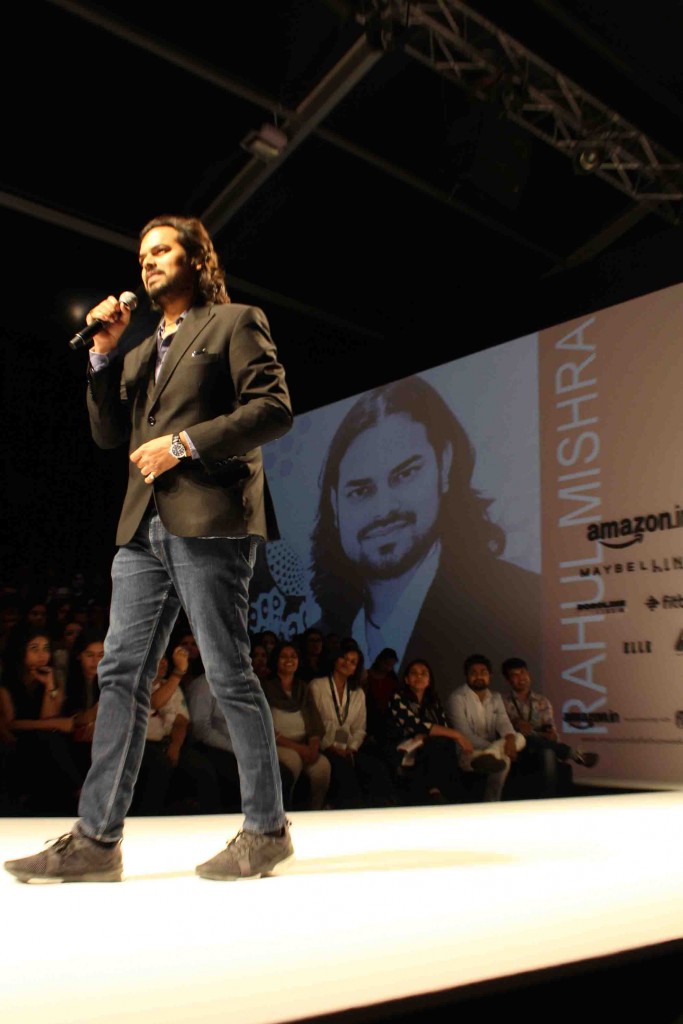 Rahul Mishra, on the other hand, had a clear perspective on how he contributes to the nation. Rahul is the winner of the coveted International Woolmark Prize, and former MTV Youth icon. 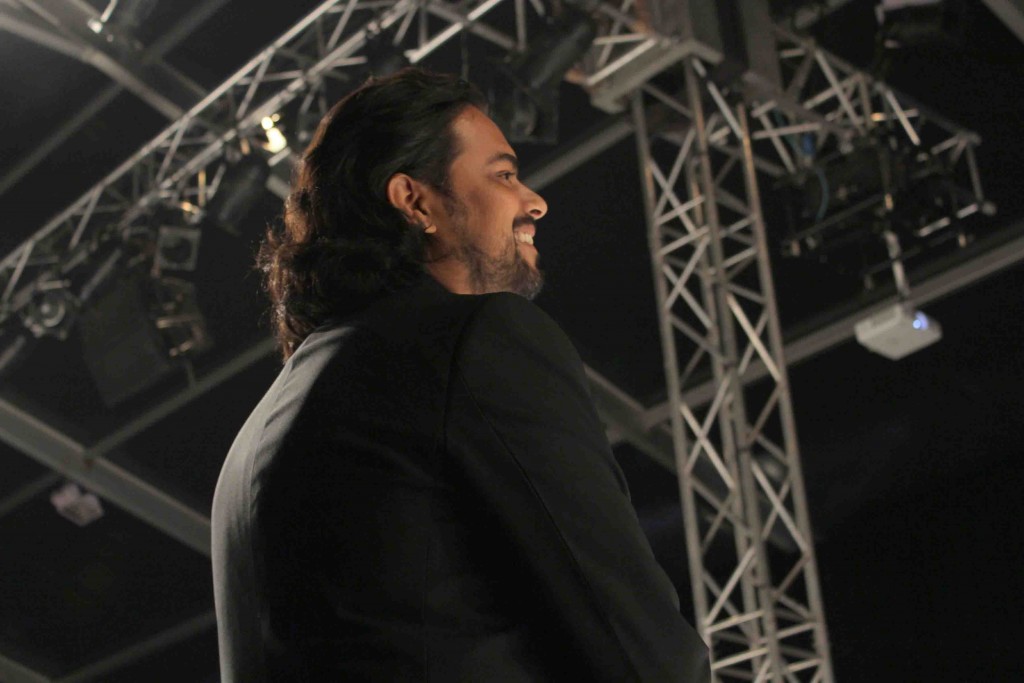 He rests his faith in the sustainability of villages and believes in providing more and more employment to traditional artisans and craftsmen by taking work to their villages. He also emphasized on the non-changing nature of a philosophy as against the ever-evolving final product. 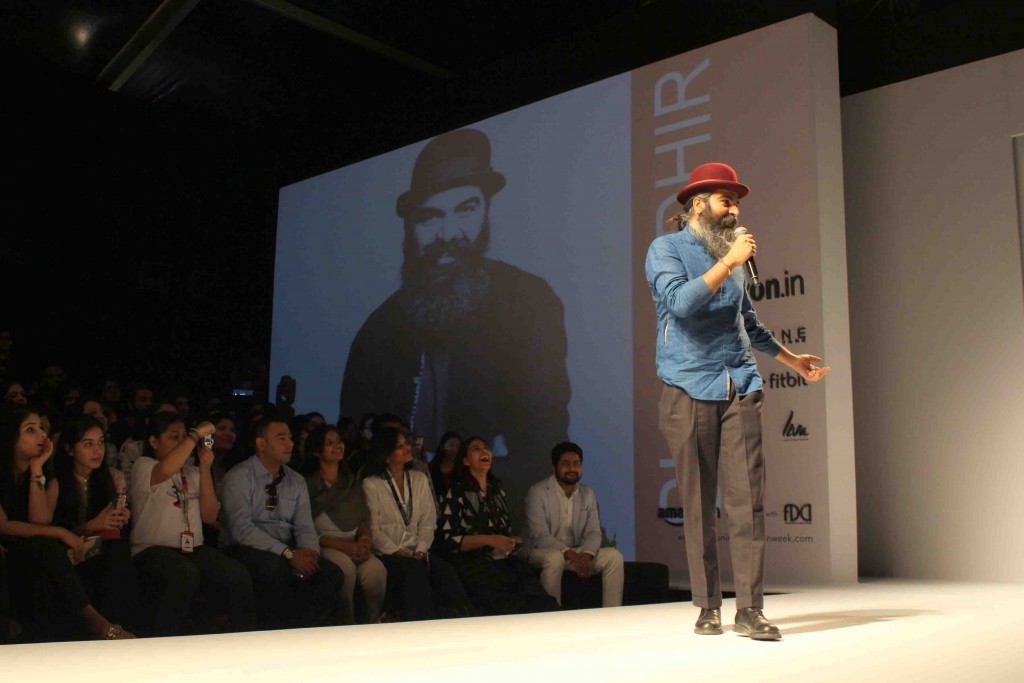 Suket Dhir had the audience engaged as he talked about his fortuitous entry into the world of fashion. Specializing in menswear, Suket has designed apparel wear for a popular denim brand and has initially also worked at a call centre to earn a basic pocket money. Now he has his own international label that is dedicated to comfort as he uses fabrics that can breathe. You will find quirky silhouettes in his clothes apart from parrot and umbrella prints. 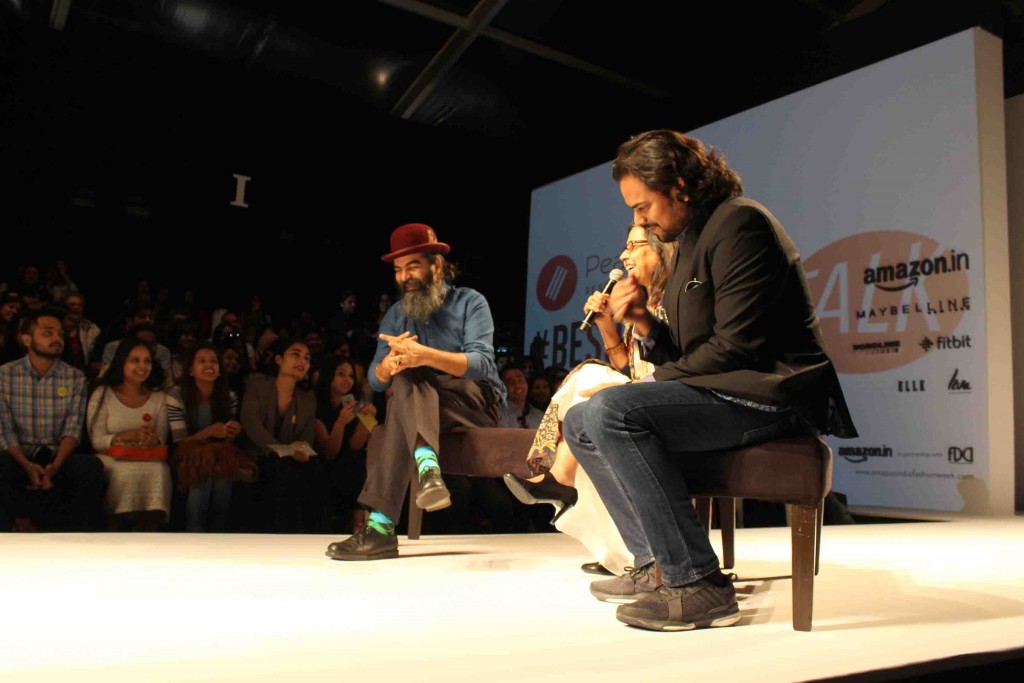 His “organic” clothes are mostly made of pure cotton, as pertained in his recent campaign called “cool wool” in association with the Woolmark Company. The collection is fresh, summer friendly and wearable by the regular masses. 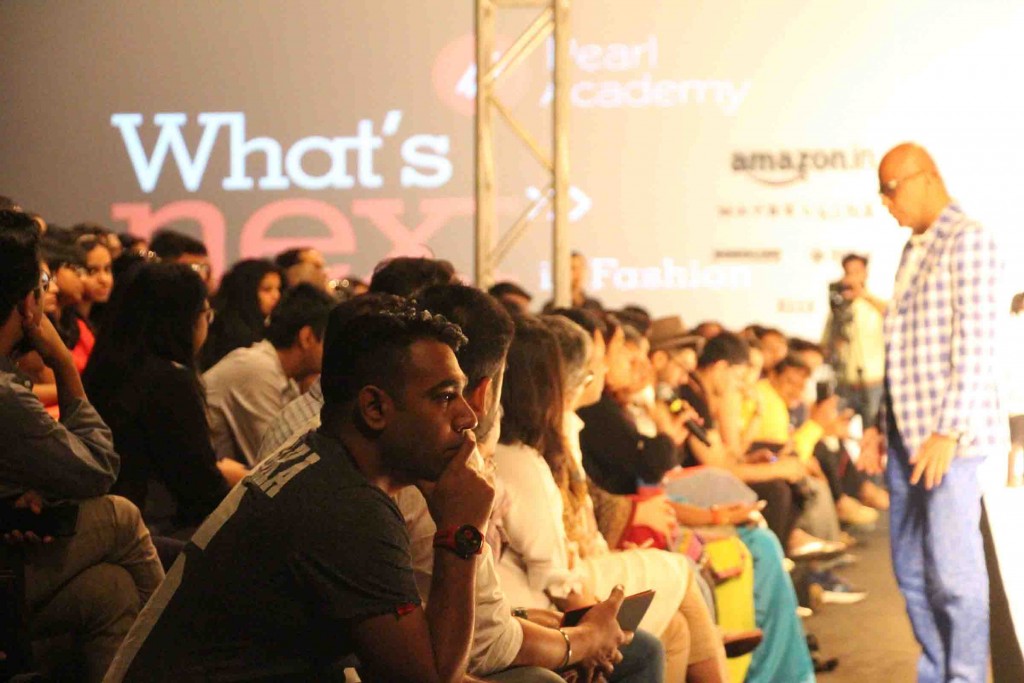 The second discussion was a futuristic one with the hashtag #WhatsNextInFashion as the panelists came together to have a talk on what is in store for the fashion industry. We had Phylida Jay, a fashion anthropologist who spoke how one can negotiate consumer desire, aesthetics as well as ethics. Noting the increasing popularity of blogs, Manou from Wearabout explained the role of blogs, and about the consumption across classes. 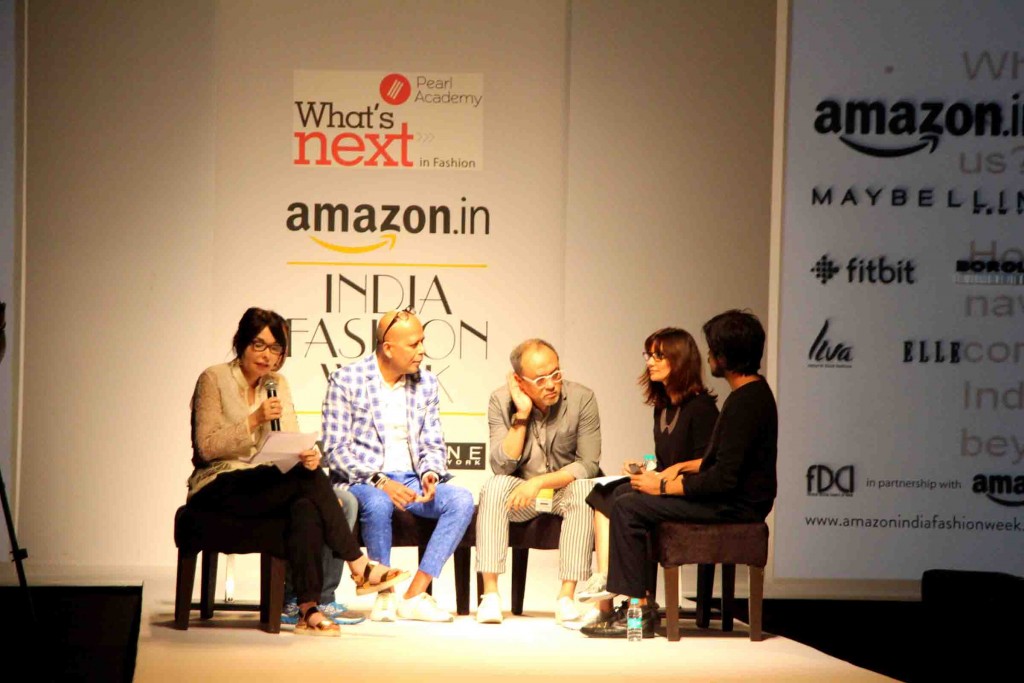 While fashion Designer David Abraham warned against consumption and urged for it to be monitored at every stage. Ganesh Subramanym, the CEO of Stylumia was also present and elaborated on the potential of technology to transform the interaction of fashion consumers. He shared his example of trend forecasting with the help of technology, online research and digital polls. 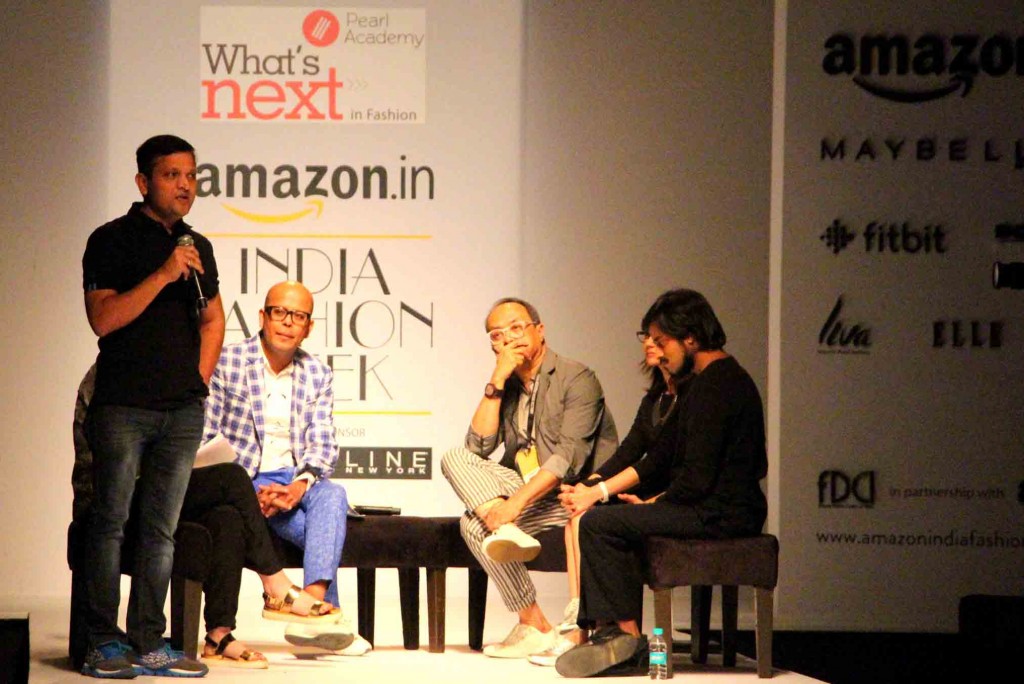 The editor of Harper’s Bazaar, Nonita Kalra focused on democracy and anarchy of fashion communication. She discussed and share her views on the growing digital influencer’s market, pointing out the positives and negatives of the hierarchy. She also expressed with experience, her desire to overlook artificial segments of productivity and focusing on the organic perspective of entertaining and educating the masses. 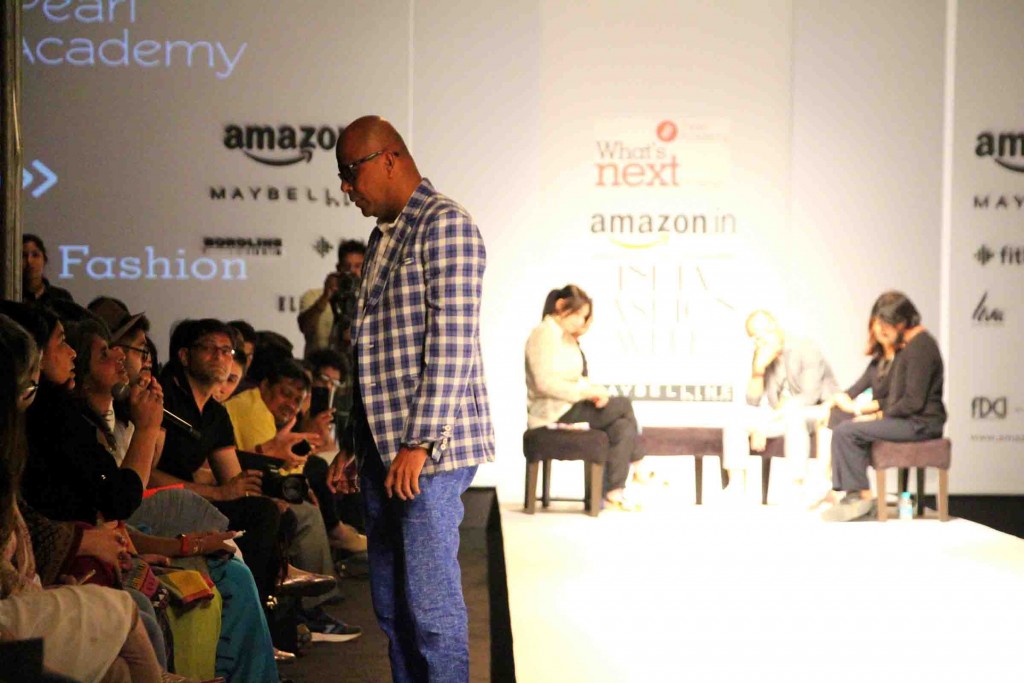 Mr.Narendra Kumar from Amazon expounded on the relevance of India modern, Amazon India’s role in promoting the cause, his take on the importance of promoting menswear (which often lacks existence on the runways) and his mindset on sustainability of the industry with accordance to the demand in hand. 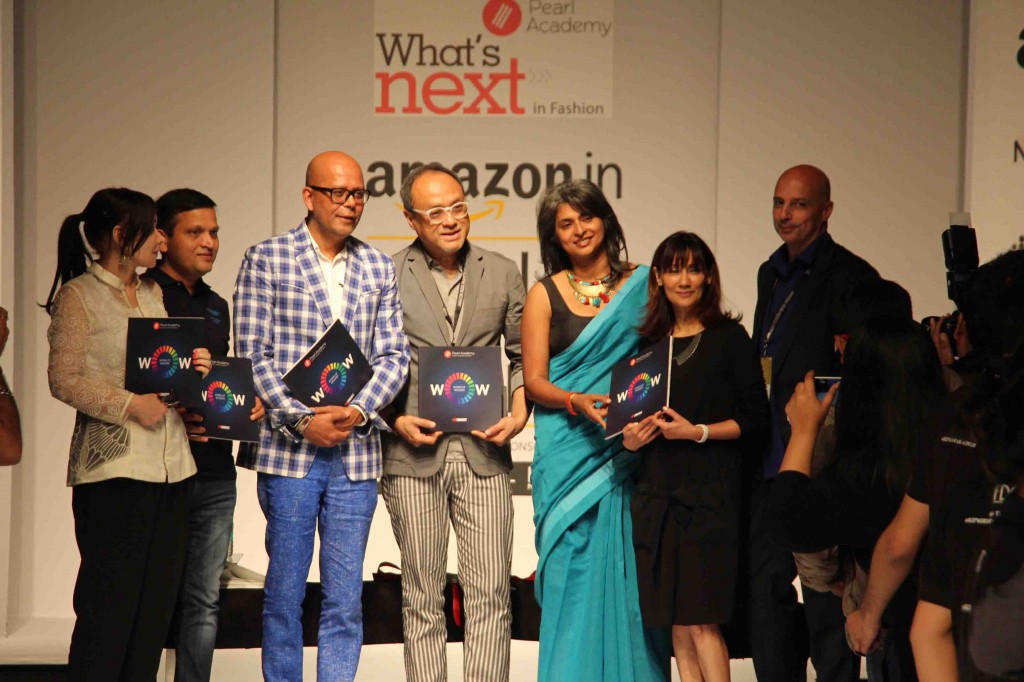 We also witnessed the official book launch of Works of Wonder that contains 12 socially inclined projects by Pearl academy students. So what’s your take on #BeSomebody and #WhatsNextInFashion? 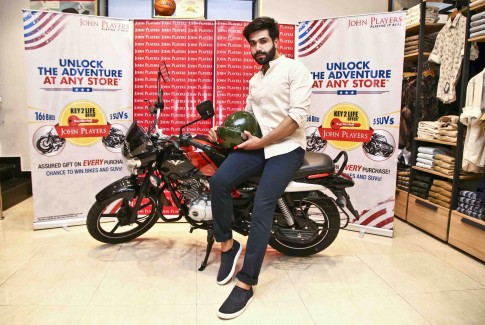 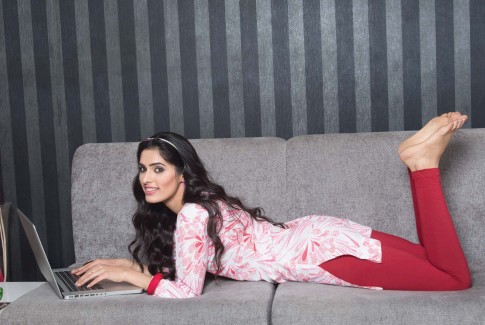 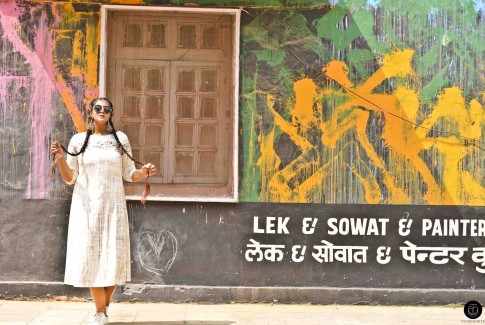 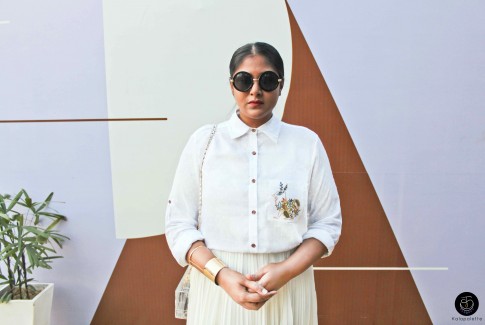 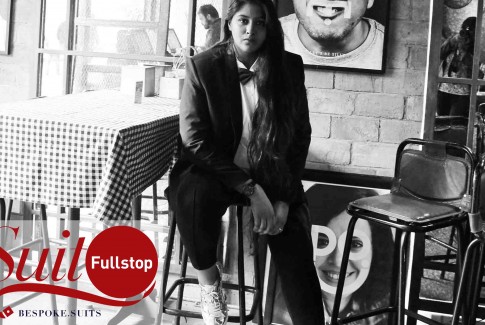